Henna is an Arabic word for a plant-based body art that is important to cultures around the world. Personally I have hennaed women with roots in East and West Africa, the Middle East, South East Asia... all who have home stories. To get us started, I invited some women to share their henna stories. Want to share yours? email me! 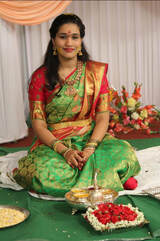 SRI
Sri is the owner of Petals + Butters, she recently relocated to N.C. Her roots are in Andhra Pradesh, India.

Henna is a fun tradition where I come from that brings together 3 generations of Indian women. It is a plant most grandma's grew in their yard to harvest when their grandkids came to visit in summer holidays  :) I remember my great grandma harvesting the leaves, grinding them up into a paste and applying it as tops on the fingers (imagine mushrooms) and she would put a big round circle with the in the palms and if she was feeling fancy, would put multiple little circle around the big circle and call it moon and stars because the paste was basically grounded leaves, it didn't have a fine texture to make designs so all we got was a sun, a moon and stars haha. She also would put a giant round on the bottom of our feet. Henna in it's original form draws excess heat from your body and cools it down, which is very necessary in summers to regulate your body temperature.

It is one of the main traditions during weddings too! Although it looks like it's for beauty, during my wedding I realized, brides and most women folk would be under high stress and anxiety during weddings and just the fact you have to sit down for few hours chatting with each other and the fact, henna paste itself cools down overheated and over stressed bodies made sense why our wise ancestors made it a point to include henna/mehendi/gorintaaku ceremony a must in Indian weddings :)

LAMA
Lama has a career in health care here in metro-Detroit. Her roots are in Palestine.

Henna to me has always been about joy. As a child, henna was associated with a happy event. I grew up watching Arabic tv shows or movies and the actresses would have the most gorgeous henna stains. I would see pictures of my cousins and aunts and mom on their wedding days with henna designs on their hands and feet. As I got older, I wanted henna for all the celebrations.

Eid is the happiest days and I made sure I always had henna to show the joy in celebrating. For weddings and bridal showers, I used henna to celebrate the joining of two people and to represent their joy.

​The smell of henna and the beautiful design always brings me to a place of happiness even if there is no major celebration.

​It simply brings joy to my heart.

ROMICA
Romica is the founder and lead architectural designer of Minimus Design Studio in Metro Detroit, her parents emigrated from Punjab, India.

Henna, also known as mehndi in India, is prepared from a plant and is predominantly used for weddings or other religious celebrations. It symbolizes joy and beauty, especially for a bride. India is heavily devoted to the art of ornament and adornment and mehndi is one of the most inexpensive and natural ways for beautifying a bride. This goes along with the bindi, bangals, and elaborate patterns in the red dresses.

There is fun symbolism in mehndi as well. Legend says that the darker your mehndi stain is, the deeper the bond between the bride and her husband or mother-in-law. Your marriage will be a long and loving one. We even use a mixture of lemon juice and sugar to keep the mehndi paste moist to darken the stain and the bride would sleep in it overnight before scrubbing the paste off. This is obviously a myth but it really brings out the joy in people.

From my personal experience, my friends and family would originally have a mehndi party a day or two before the wedding ceremony. Usually close friends and family were invited and the bride would be one with the most elaborate design, while the other ladies had a more simplified design. Brides would sometimes include designs that symbolizes the love between the bride and groom. As a game, the groom's name would also be written in the design and the groom would have to try to find it. I too would sleep in the paste overnight because I wanted it to get as dark as possible, even though I was not the bride. It was so much fun seeing the results!

Unfortunately, my childhood experience with mehndi wasn't always the happiest while growing up in the United States. I was always bullied at school every time I showed up with henna on. Students would ask me if I have a disease on my hands and they did not think it was beautiful at all. I would end up pulling my sleeves over my hands and then no longer got henna again until I was an adult. What was once peculiar is now a trend in the western society, without taking in the people and their cultural history. It took me years to gain back my confidence and love for my tradition and it's hurtful when I see people getting temporary henna "tattoos" at music festivals. It is so much more than that.

One cannot wear henna and not care about the people it originated from. Grateful I am able to practice my tradition again. 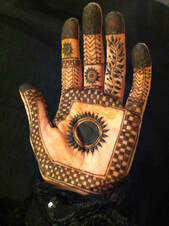 ANGIE K.
My first experience with henna was watching my mom use it as a hair dye in the 80’s and 90’s.  I remember her stirring the powder with eggs, yeast, honey and tea to make a thick paste and working around the house with the mixture on her hair.
I was soon able to tell that many of my aunts and relatives used henna as well due to the similar auburn hue the henna created on dark hair.

As I got older and was able to attend weddings and pre-wedding ceremonies, I quickly recognized the henna mixture used on brides and the women around her the night before the wedding during the “hafla”.  “Hafla” is the Arabic word for celebratory gatherings and parties.  During the hafla the night before weddings, close relatives would gather for food, drinks, music and dancing.  While close relatives for some might only include around 20-30 people, it’s not uncommon for Arabic families to have haflas with at least 100 to 200 people attending...all the night before the actual wedding too!

The hafla would include traditional rituals for both the bride and groom, and one of the rituals for the bride would be to make a henna mixture with tea and yeast and place the mixture in the middle of the bride’s palm while singing songs filled with best wishes for the future couple.  I am happy I was able to experience the same custom the night before my wedding too.  It also fills me with love and joy when I think about my aunts, many of whom have now passed away, singing the old traditional songs not known by many within the younger generations.  Unfortunately, I am one of them, which is why I love seeing the traditions that I grew up with still around me today.

While the beautiful intricate henna designs and artwork typically seen on arms and hands are not reminiscent of the blob of henna placed in one’s palm during the ceremonies I recall, the images still stir nostalgic and joyful emotions inside me.

It also helps me to remember and honor my Palestinian heritage and all of my brave ancestors who have paved the way for my family and me.  Since I was born in America to Palestinian immigrants who where encouraged to assimilate to the American culture, I am quite Americanized.

I also grew up during the Gulf War and often didn’t appreciate my heritage due to the negative stigma often portrayed of Arabic cultures and countries in the media and movies.  However, as I grow older and have a family of my own, I love to embrace all the wonderful things about my culture and the traditions surrounding it and to teach my children to honor them as well.

*the photo is the artists hand with a design from Loretta Rhoom. The style Angie describes with the simple dot in the palm, and sometimes dipped fingers is very common and beautiful, but not intricate and lacy.